The following article was created by Mike Searson for AmmoLand and can be found here: https://www.ammoland.com/2018/02/time-with-some-t...

We often say that the heart of a rifle is its barrel, but the trigger is its soul. When it comes to Modern Sporting Rifles (MSR) like the AR-15 platform, most factory rifles feel soulless.

Standard military grade triggers flat out suck. They are almost like the plastic factory sights that come standard on Glock pistols: Placeholders until you get your hands on the real thing.

In this case, the real thing comes from Timney Triggers.

Installation is fairly simple and can take as little as 5 minutes. Obviously, it will take a little longer if you are retrofitting an existing rifle and need to remove the old parts.

The company was founded in 1946 by Allen Timney to produce replacement easy to install and most importantly safe triggers for military surplus rifles being sporterized after World War II.

As an amateur gunsmith, we used plenty of their triggers in Winchester Model 70s, 98 Mausers, Remington Model 700s and even in an Eddystone Model 1917. Timney had set the gold standard for quality bolt action triggers decades before we were even born.

We were actually surprised to hear that they not only had been making AR-15 triggers but that they were making some of the best.

Every Timney Trigger is manufactured, hand-assembled, calibrated and tested by the trigger experts at their state-of-the-art facility in Phoenix, Arizona.

Each one comes with a no-questions-asked 100% Lifetime Warranty and a staff of experts who can assist you if you should run into a problem.

Although we are specifically talking about AR triggers, Timney offers over 170 triggers for rifles, shotguns, and bows.

Timney triggers are EDM (Electrical Discharge Machining) Machined from S7 tool steel. S7 is a Shock-Resisting Tool Steel hardened by air or oil and is characterized by very high impact toughness. EDM machining is crucial for accuracy with regard to manufacturing trigger parts as the non-directional surface finish makes for a smoother trigger pull without the grittiness associated with a part cut from a CNC machine that is not polished.

Due to their proprietary design, Timney's AR triggers eliminate pin rotation and walk out with the standard hammer and trigger pins. There are no end caps, washers or machine screws to tighten the trigger group to the pins.

The only problem, if one could call it that, is that the lower must be MILSPEC. If you have an off-brand lower or one that was completed from an 80% kit you may be out of luck.

This trigger is a 100% drop-in ready true self-contained unit that can be installed in minutes with no gunsmithing, fitting or adjustment by the user. The standard factory pull weight on this one is 4 pounds and it makes use of your factory hammer and trigger pins.

The housing is machined from lightweight 6061 T6 alloy which is anodized for superior durability. The hammer is EDM (Electrical Discharge Machine) machined from S7 tool steel and features a Nickel coating which helps deliver the exceptionally smooth, crisp single-stage pull. The other components of the trigger are EDM cut from A2 tool steel, then heat treated to Rc 56-60.

If you like the single stage trigger you will love this one that breaks at a crisp 4 pounds. Now a few readers may think there is no difference between the two trigger types (AR-15 vs AR-10) and an AR-15 trigger will easily fit in most 308 variants. However, because of those large and hard military primers found in 308 Winchester or 7.62 X 51mm, Timney does it right by adding a bigger and heavier hammer to achieve more consistent primer strikes. 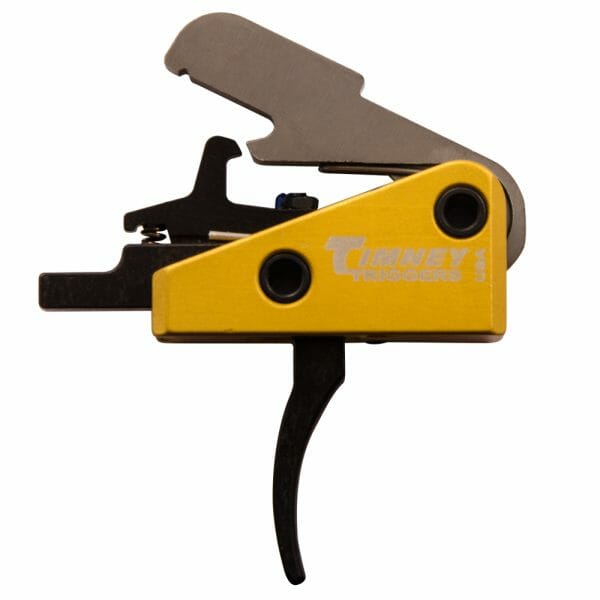 Again we have a trigger that can be installed in minutes with no gunsmithing, fitting or adjustment by the user. This is a single stage trigger with a pre-set pull weight right at 4 pounds and it makes use of your factory hammer and trigger pins.

It is identical to the AR-10 trigger in all regards save for the bigger hammer found in the aforementioned unit.

We are probably boring you to tears at this point, but we prefer single stage triggers on match grade rifles for the range. In a defensive or tactical role adrenaline or the case of the jitters can cause a shooter to fire prematurely with a single stage. Nobody should have that type of condition at a shooting bench at a range. 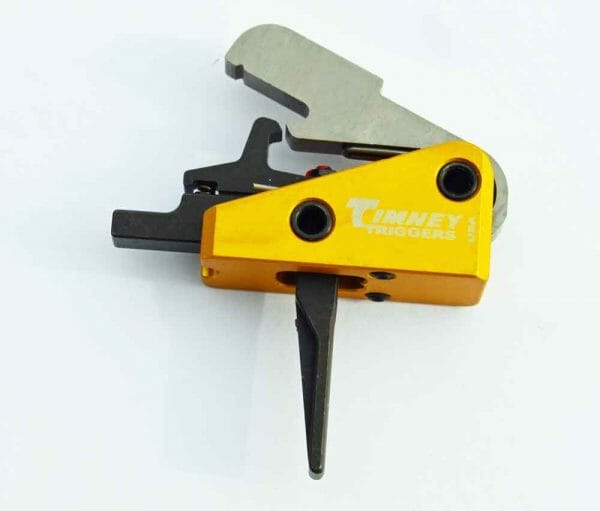 ou may think that this is a simple variation of the previous trigger, but it is more than just reducing the pull weight by one pound. This trigger sports a flat face as opposed to a curved one.

This can be good or bad depending on your preference and training as a shooter.

We will start with the downside that will lead us to the good.

A flat trigger has no reference point for your trigger finger. This may not matter as much on a handgun, but on a rifle, it can be critical. A new shooter or shooter new to a flat faced AR trigger may engage it at different points along the face. This can lead to an inconsistent trigger pull. The lower on the bow that you engage, the lighter the trigger will feel.

The trigger is not getting lighter you just have fewer off-axis forces negatively affecting you as you squeeze the trigger. If that sounds a bit too technical for some folks, envision someone shooting for the first time who jerks the trigger so hard that they pull the firearm to the right, left, up or down and the bullet launches in that direction. That's a bit of an exaggeration, but when you are shooting for the tiniest group possible, all those exaggerations and mistakes matter.

This is what leads us to the good aspect of this trigger.

Because it is more of a straight pull (or rather “push”), the trigger feels lighter and crisper. As we mentioned earlier, you gain the flexibility of choosing where to put your finger. The lower you place your finger, the lighter the trigger will feel. It's about reducing or increasing leverage.

I would prefer this trigger on a dedicated competitive precision rifle, if for any reason to know while engaging the trigger that it is not going to be the same as those found on my other rifles which may have a different pull weight. 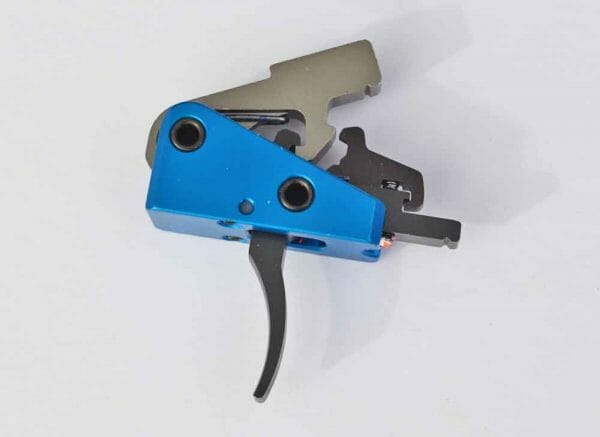 You have your target in your sights, you slowly start your trigger squeeze and he moves at almost the last possible second. You can ease it back or just hold it until you get another chance. The two-stage trigger gives you options.

As you pull through the weight of the long first stage you have the option to pause. You can then correct your aim, apply Kentucky windage or even ease the trigger forward should you decide to not take the shot and start over. Alternatively (and probably most of the time) you can squeeze through the second stage effortlessly. Most importantly is the little extra margin of safety to prevent you from jerking the trigger due to adrenaline. 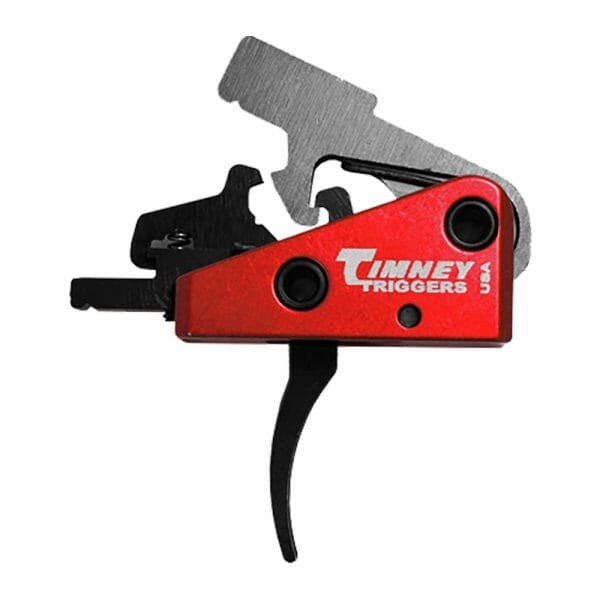 After playing with both of the Timney two-stage triggers we received, we tended to like this one a little better. It is a 2+2 configuration with the first part of the trigger pull feeling shorter than the second part. If you are a fan of single-stage triggers and want to diversify a bit with a two-stage model, this one should be right up your alley.

The initial take up is a short two pounds. This means that you will hit that wall a bit quicker than you would think. It gives you enough of a pause if you need to scan, reassess or simply shoot the rifle. Like the previous version should you need to shoot rapid fire, you can easily pull all the way through each and every time.

Timney triggers have been used by hunters, target shooters, and competitive shooters for over 70 years and the five we looked at represent a fraction of what they produce. These five represent less than half of what they produce for the MSR market and each one is different enough to appeal to shooters across that market.

The single stage AR-10 trigger is a great one for your bigger bore AR platform in 308 Winchester, 338 Federal or 6.5 Creedmoor. We have tried a lot of different triggers for that rifle and this one is definitely a top-shelf trigger.

Typically, we are not a fan of most flat faced AR triggers, but Timney's flat-faced single stage trigger seems perfect for a Precision rife shooter who knows what they are doing behind the gun. and the other three would easily turn any good AR into a great one.