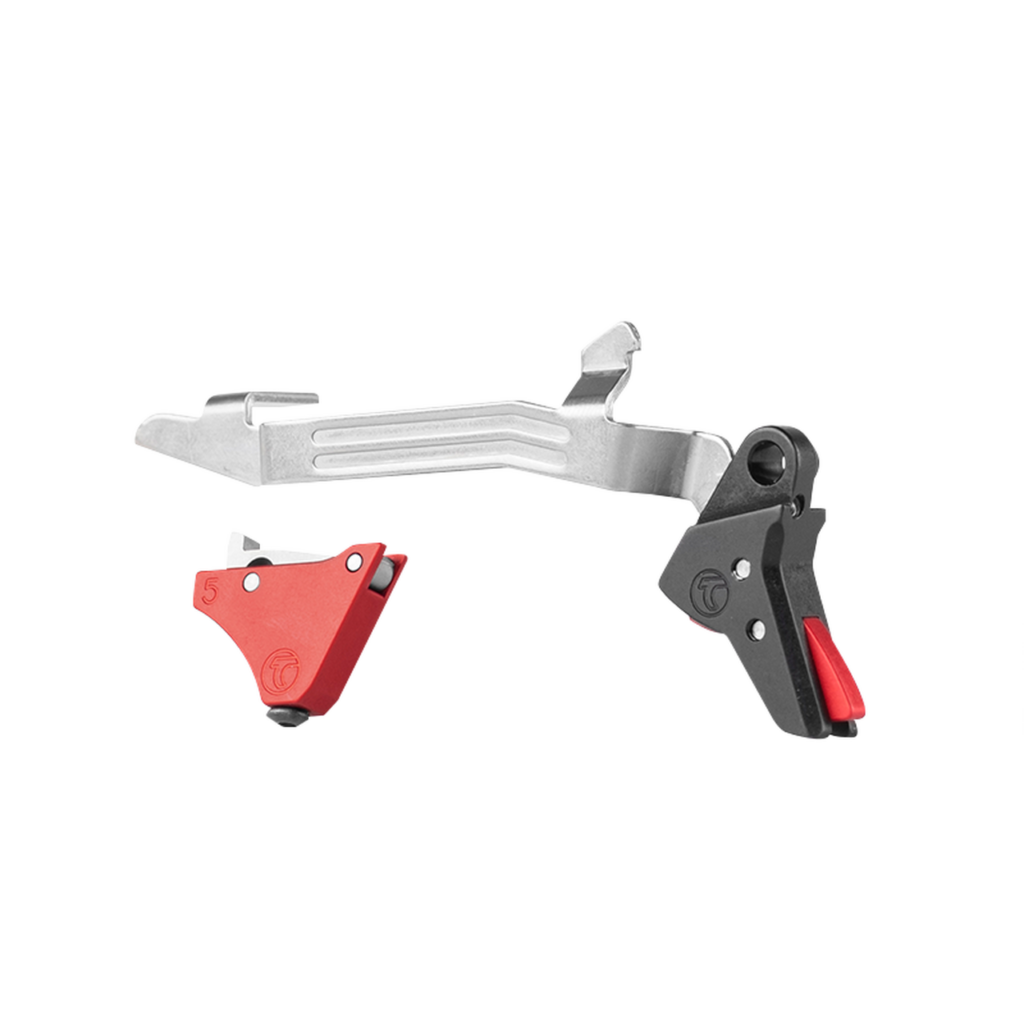 I got my start in the gun industry doing Glock trigger jobs in the late ’90s. I had a version that broke under 2 pounds using modified stock parts – except the firing pins spring. I have done over 1000 trigger jobs since then. They are now all more or less obsolete thanks to Timney.

Glock opened their US offices in 1986. I am amazed it took 35 years for someone to do what Timney did to change the trigger. It’s one of those things that is so simple you smack yourself in the head and say, “why didn’t I think of that?”

The Alpha trigger is available in two versions. One for Gen 3 and 4 Glocks and another version for the Gen 5 Glocks. The Gen 5 uses a totally different trigger bar, firing pin, firing pin safety, trigger return spring, and trigger mechanism housing. As a result, Gen 5 guns cannot use previous gen trigger parts.

My Alpha Trigger even came with Candy! It also included all the tools you need for installation. 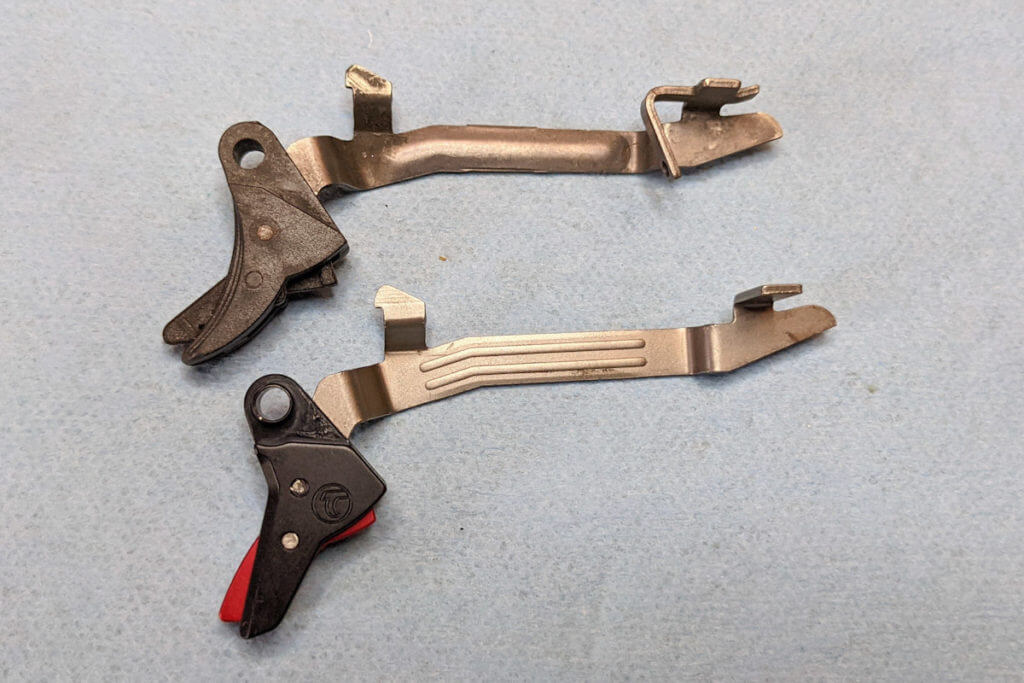 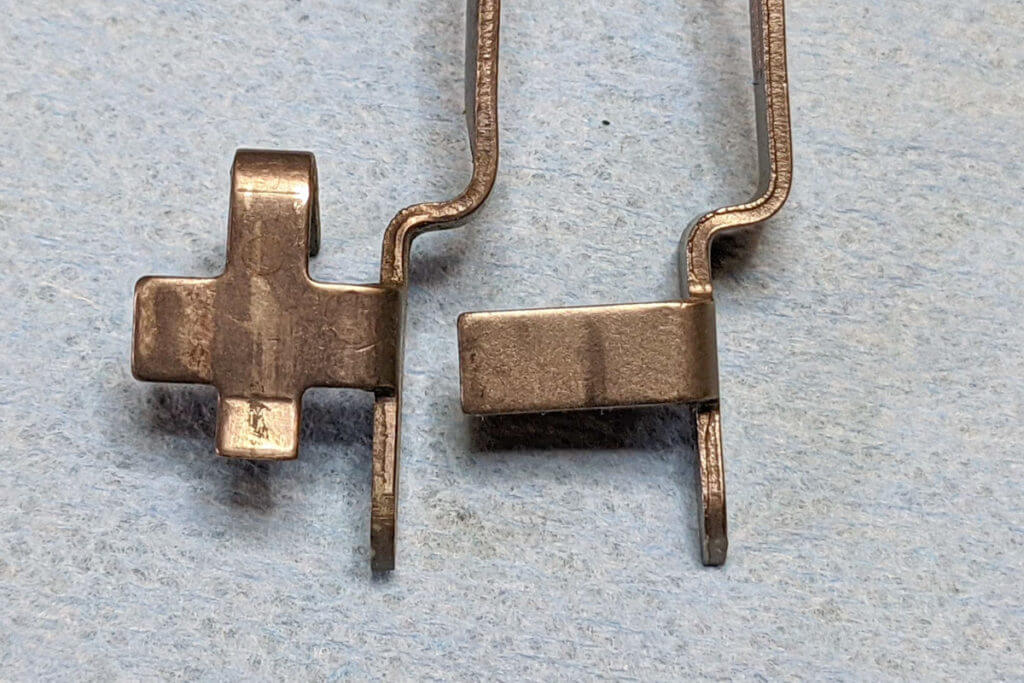 Stock trigger bar left and Alpha right. The Alpha does not touch the firing pin so there is no cruciform on the trigger bar.

Timney got rid of all of that with the Alpha trigger. An aluminum sear housing replaces the trigger return spring in the trigger mechanism housing. The firing pin lug is now engaged by a sear and all the trigger bar does is lower the sear to let the firing pin fly. You now have nicely machined surfaces engaging each other and the firing pin spring weight has a much smaller influence on the trigger break weight.

With all stock factory parts, you can expect a break weight of 3-3.5 pounds when using the Alpha trigger. Not only is it light, but it’s also smoother and crisper with less stacking and creep. Even when using a plus connector I was still able to get a break weight under 4 pounds. If you want to go lighter that is easily achieved by swapping to a dot or minus connector to get under 3 pounds. 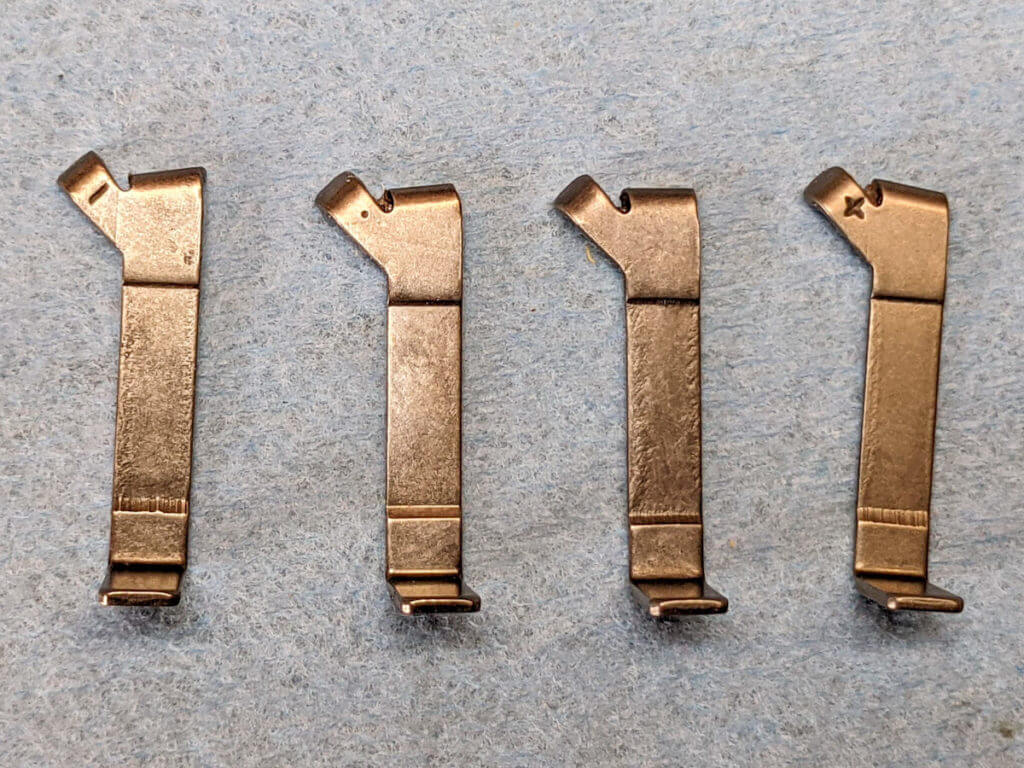 Glock connectors. Left to right: Minus, Dot, Standard, and Plus. 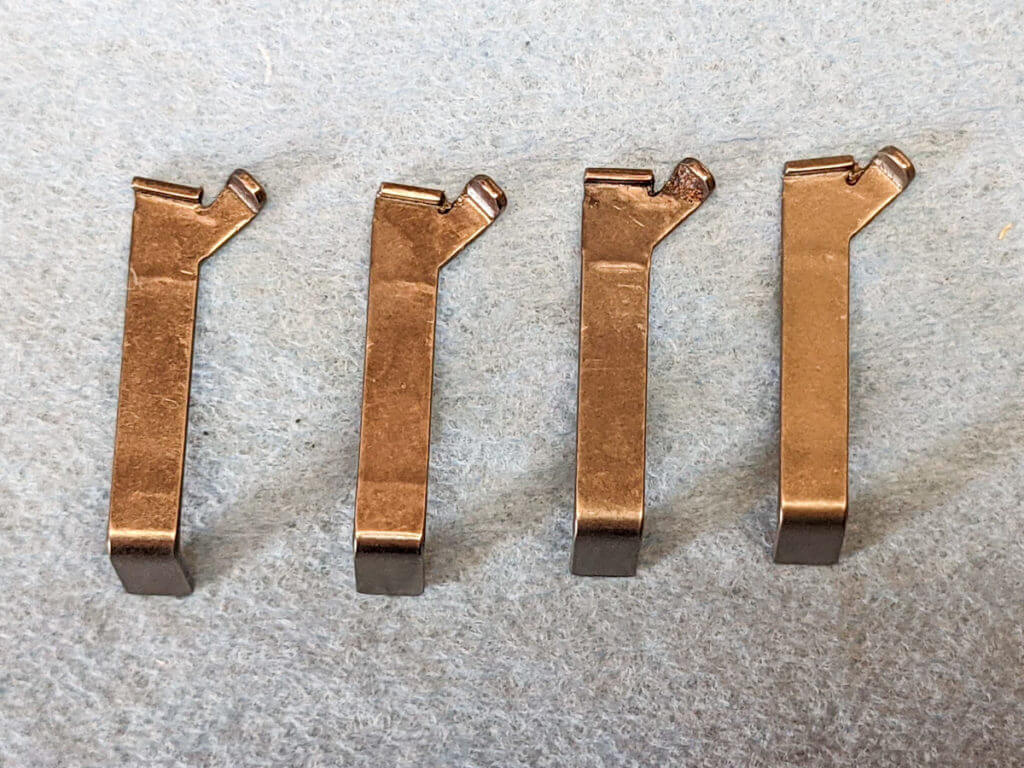 Glock connectors. Left to right: Minus, Dot, Standard, and Plus. The angle has a large effect on pull weight. 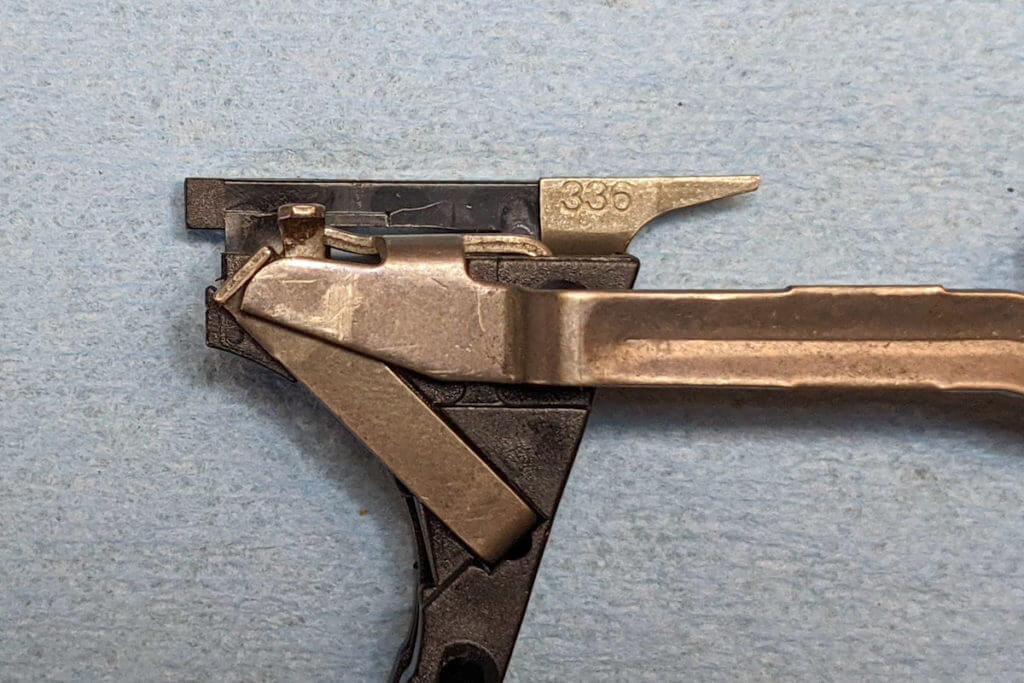 A shallower angle on the connector lowers the break weight. Standard connector shown.

I have been shooting both versions of the trigger for the past few months and have about 4000 rounds through the Gen 3 and 1000 through the Gen 5. This is where I discovered the downside of this new trigger. 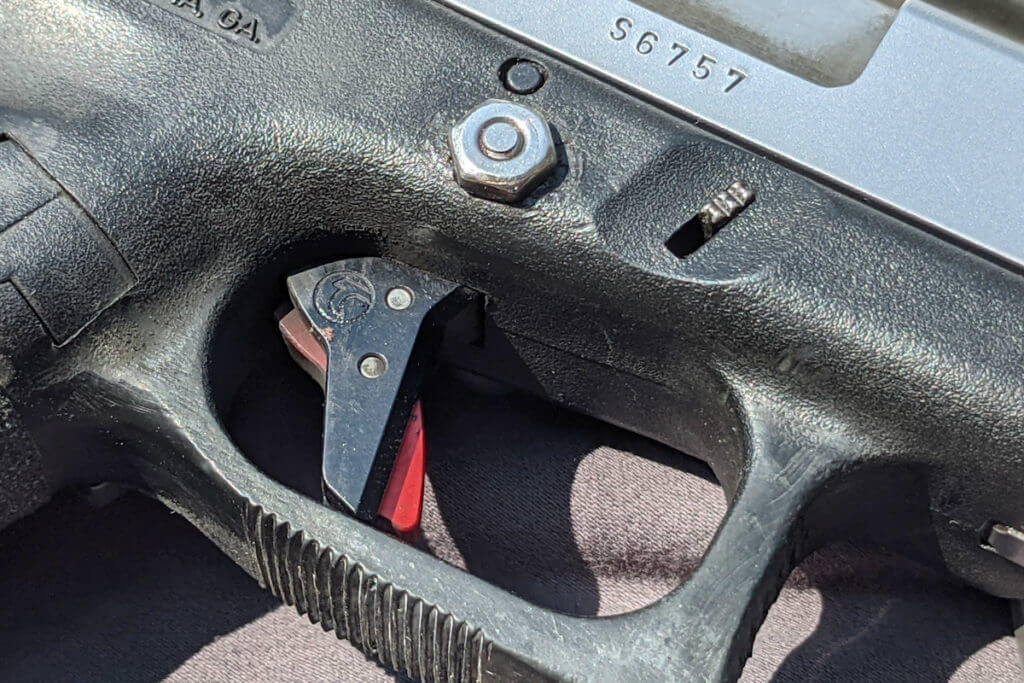 The author’s well-used Alpha Trigger in a Gen 3 Glock 17.

In May I was shooting my Gen 3 at a Steel Challenge match and on the last stage, the trigger would not let go of the firing pin. It felt like an overtravel stop that was incorrectly adjusted and wouldn’t let the trigger go all the way to the rear and release the firing pin. Instead of trying to fix it on the clock, I cleared the gun and left it as is so I could take it apart and try to find out what happened.

At the time of the failure, my trigger had fired about 2500 rounds without cleaning. After tearing it down it seems that a small piece of debris (dirt, carbon chunk, unburned powder etc) got into the sear housing and prevented the trigger bar from pushing it downwards.

The problem is easy to fix though. You need to clean it more often. My recommendation is to spray out both the factory trigger mechanism housing and the Timney sear housing with brake cleaner or similar every 500-1000 rounds. Since I started doing this I have had zero issues with the Alpha trigger. One of the reasons Glocks are popular is that you can be lazy and go thousands of rounds with no maintenance. With the Timney Alpha you cannot be lazy. It’s like a racecar vs. a daily driver. A modern production car can go 10,000 miles without maintenance. A racecar is a high-performance machine with super tight tolerances and precision parts. Because of that, a racecar often needs a full prep or maintenance teardown every 500-1000 miles. This trigger is no different. Treat it well and it will treat you well.

My Gen 3 Alpha trigger was an early production model and some users had failures to reset due to the trigger return spring being too weak. Timney quickly made a change and now two trigger return springs are included with the kit. If you have issues with reset failure, just change to the heavier red return spring. Glock shooters who are fans of the heavy reset pressure of the stock gun should go with the heavier red spring to start as it will feel more familiar to them.

Not only did Timney revolutionize the Glock trigger, but all three factory Glock safeties are also fully functional with the Alpha. The drop safety, firing pin stop, and trigger safety all work the same as the stock setup. The shoe of the trigger on the Alpha is machined aluminum and the trigger safety is much wider and more comfortable than the stock version.

The Alpha is also adjustable for pre-travel or take up. Be very careful when adjusting this as you can easily take out too much pre-travel and partially disengage all three safeties. I recommend leaving the pre-travel adjustment screw alone and shooting it as is from Timney.

The trigger bar and sear of the Alpha are coated with NP3. Oversimplified, NP3 is an electroless nickel impregnated with Teflon. It makes metal stuff slippery and ridiculously resistant to corrosion (It won’t even rust in Florida). I have always been a big fan of NP3, so much so that most of the Ultimate 3 Gun Rifle was NP3ed. While it is slick, the Alpha trigger really likes a thick grease as well where the trigger bar meets the connector and the sear. I prefer Slide Glide from Brian Enos but any good grease will do.

This chart can guide you on what effect changing various trigger parts will do. All testing was done with a factory firing pin spring and the gray or light trigger return spring. The rest of the parts are all unmodified factory. All measurements were done with the Lyman digital trigger pull gauge. Each setup was measured five times then averaged to get the weights you see below.

Over the last 25 years, I have tried most of the modified and aftermarket Glock triggers out there. I have been using my own triggers all that time too. For years I sold my Top Fuel Trigger that broke at 2.25lbs. and cost $250. My competition Glocks will all have a Timney Alpha trigger moving forward. It is simply the best available and at $150, it’s a bargain.

Break weight 3 pounds +/- depending on other parts used.