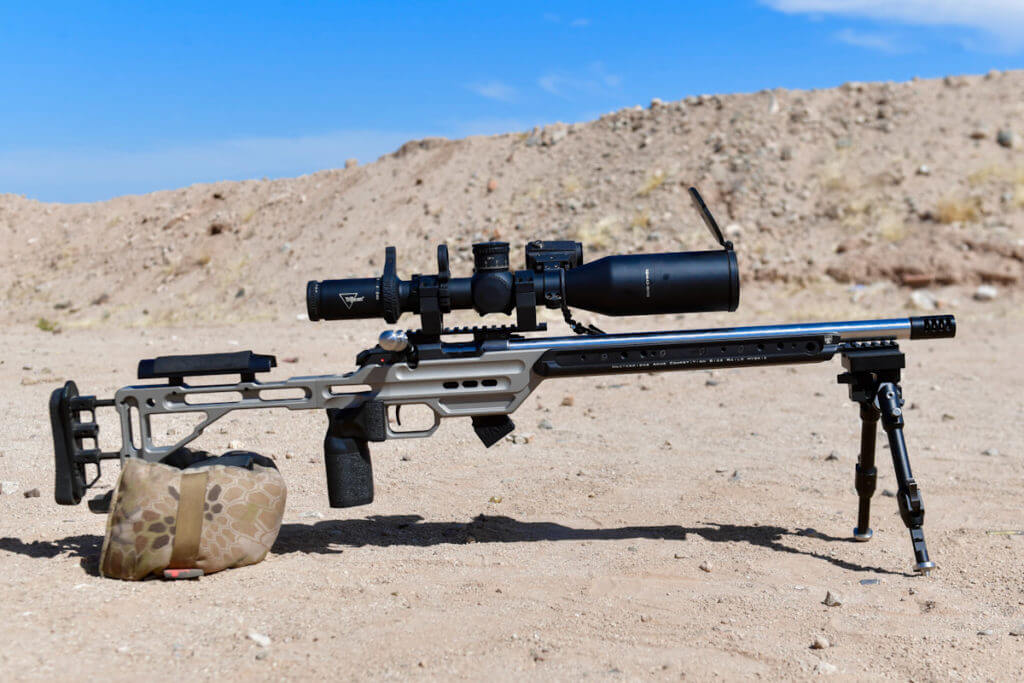 22s are some of my favorite guns to shoot. They also make great trainers or practice guns because you can shoot them for a fraction of the cost of a centerfire pistol or rifle. For Projekt 457 I wanted to build a rifle for precision rifle practice and PRS and NRL Rimfire competitions.

The 457 was made by Ceska zbrojovka, known to most as CZ firearms. The factory and HQ are in Uherský Brod, a small town in the Southeast part of the Czech Republic, near the border with Slovakia. Projekt 457’s roots were grown there.

Vudoo Gun Works is pretty much the king of the hill for precision 22s, and they are priced accordingly at over $1900 for a barreled action. You still need a trigger, stock or chassis, and optics. The Vudoo was out of my price range and I was impressed with what ­­I had seen from the 457 so I set out to see how far I could push the platform and if the 457 could challenge the Vudoo.

I had already bought a used MPA (MasterPiece Arms) chassis for the 457. I have always loved the MPA chassis as the balance, fit and adjustability suited me. Both length of pull and cheek riser height are adjustable. The fore-end which MPA calls the RAT (Rapid Adjustment Technology) Rail, is a full-length Arca rail for mounting to a tripod or attaching accessories. 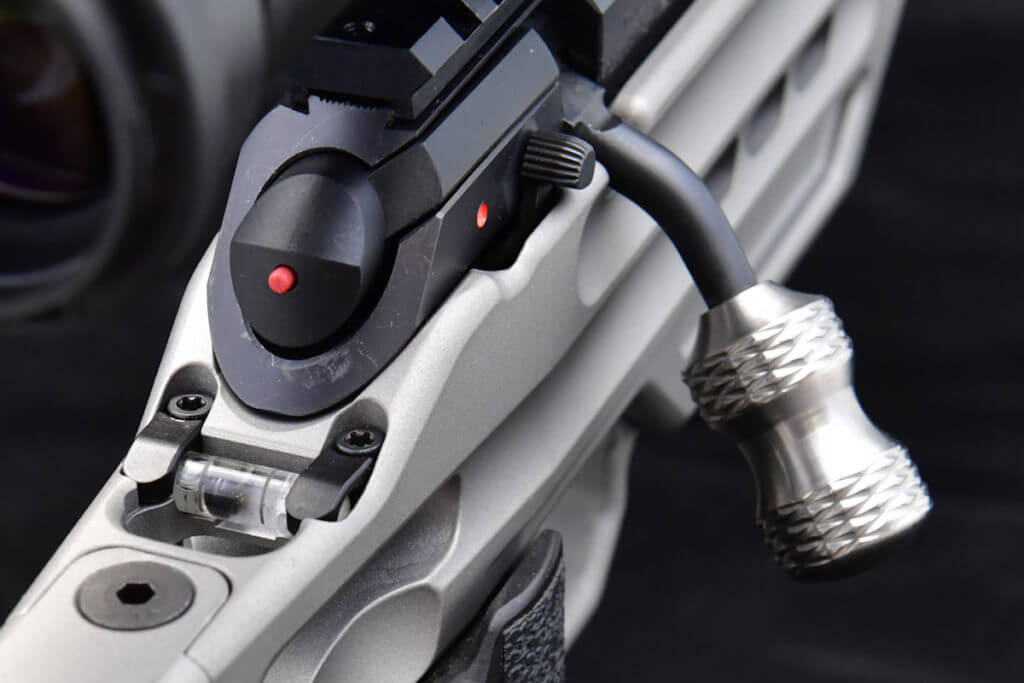 With chassis in hand, I needed an action, but CZ USA only sells rifles. I started with the cheapest 457 model I could find, the American Synthetic, which I picked up for $415. I shot it a few times in stock form, and I was impressed at what a $400 rimfire could do. It was good but I wanted great. Everything except the action and bolt was taken off and thrown in a box. 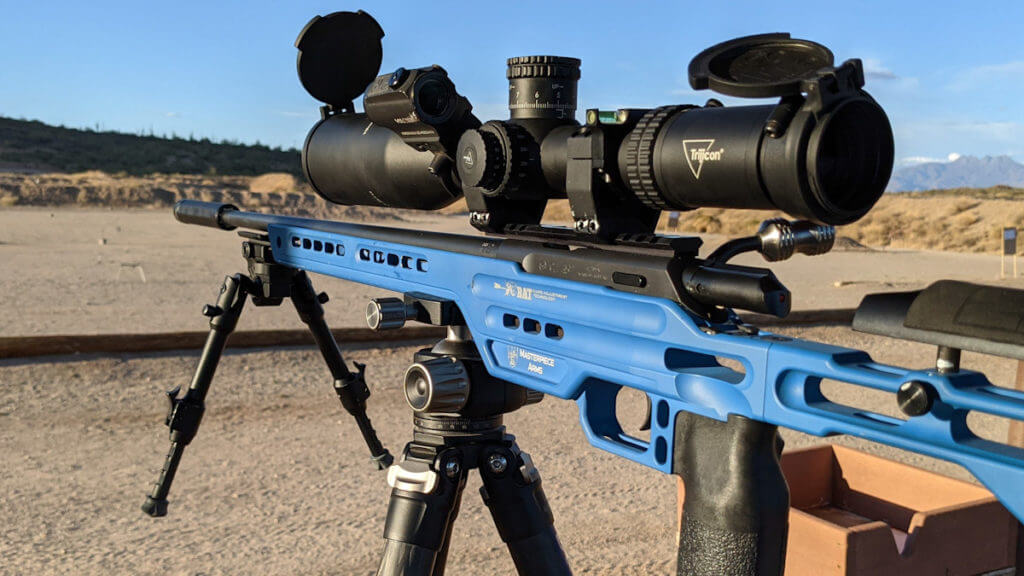 My first call was to master barrel maker Paul Craddock of Craddock Precision. They have sold barrels for the CZ 455 for a long time and both the 455 and 457 use the same barrel. They are user swappable and no gunsmithing is needed. You just loosen two set screws in the action, slide out the old barrel, and slide in the new one. It can be done in less than five minutes. CZ USA put out a video showing how to do it. 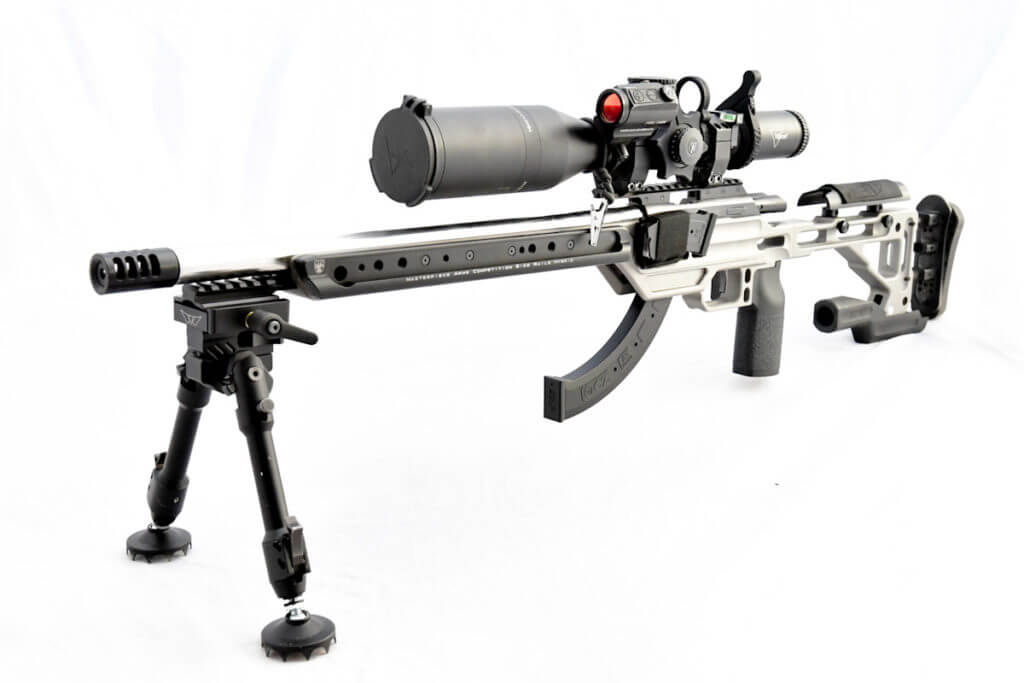 Craddock starts with a Bartlein Barrels blank. Craddock takes the blanks and turns, chambers, crowns, and finishes the barrel to your specs. There are many options for length, fluting, and threading. I went with an 18-inch non-fluted barrel with ½-28 threads. Normally I like fluting as it lowers the weight and the additional surface area cools faster. 22s don’t generate much heat, especially with the subsonic ammunition I would be using. I also wanted my gun heavier to aid in stability so I went with no flutes. The thread pattern allows the use of tons of 22 or 5.56mm muzzle breaks and compensators and that’s what my 22 suppressor is threaded for. 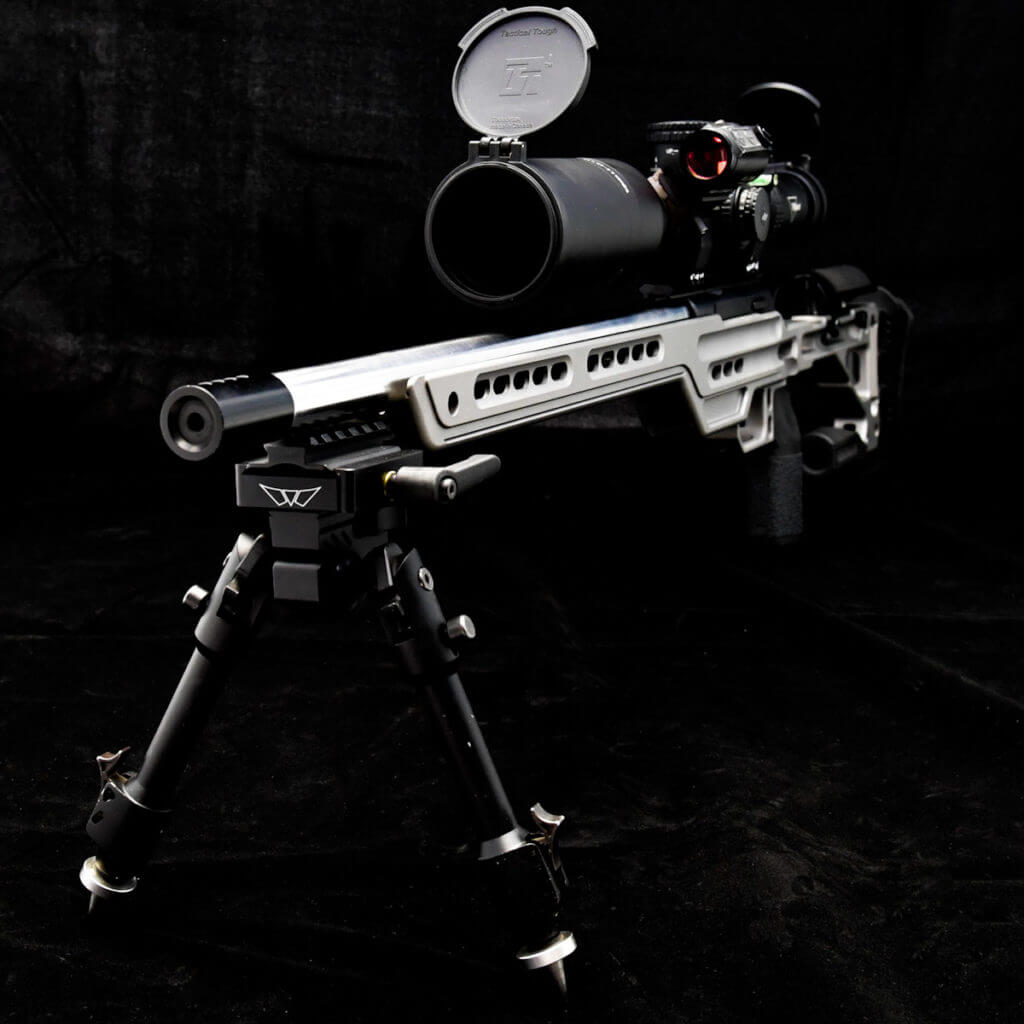 Other Craddock/Bartlein barrels I own are simply fantastic and I expected the same from the 457 barrel. I was not disappointed. The barrels currently cost $537 from Craddock. Combined with the price of the rifle that I only kept the bolt and action from, it brought the total to $952, or about $1000 less than a barreled action from Vudoo. 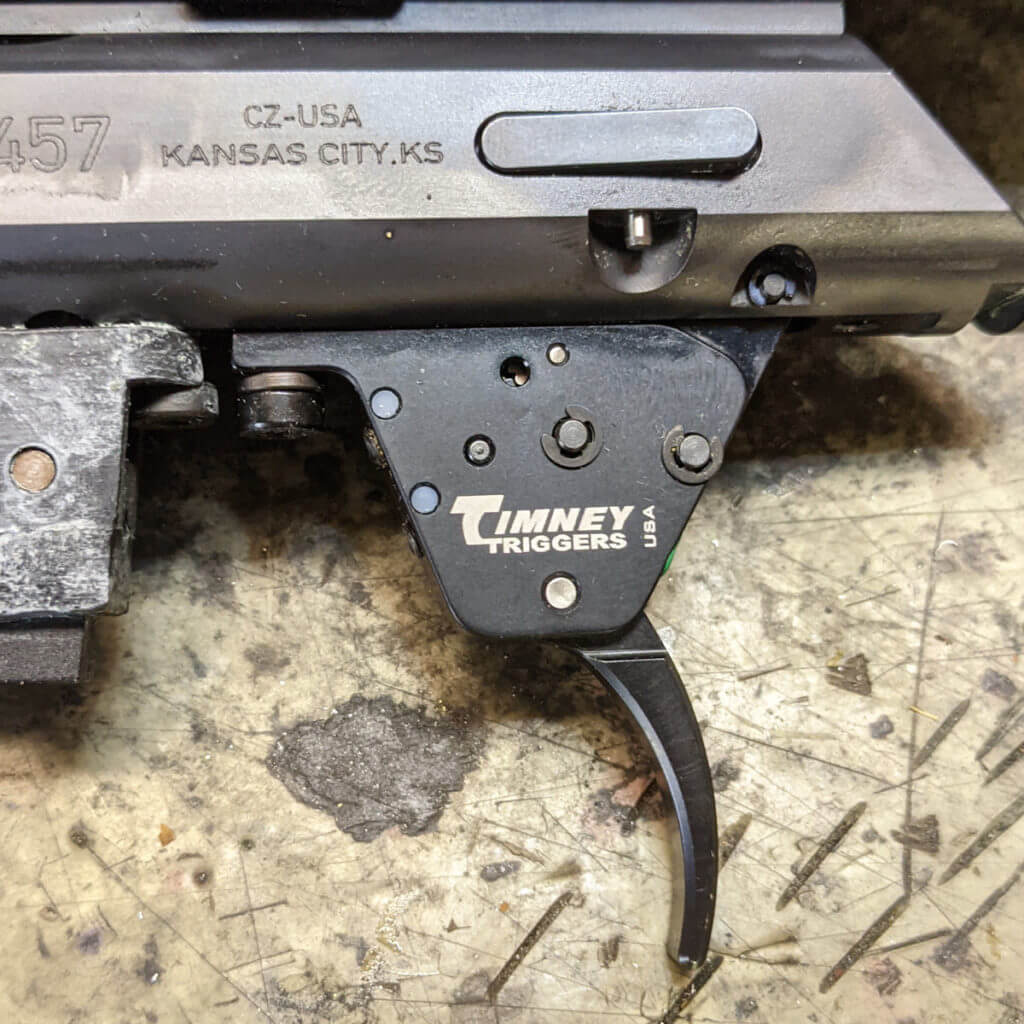 The factory adjustable trigger on the 457 is very good for a factory trigger, but the aftermarket has better options. I went with the new Timney Trigger for the 457. The trigger requires no gunsmithing and can be installed in a few minutes. All parts are machined, with no stamping or metal injection molding from Timney. The shoe and sear are heat treated to 56 Rockwell and the sear is coated in NP3. It is fully adjustable for pull weight and overtravel. Timney says the pull is adjustable from 10 ounces to 2 pounds.

After installation, I used a Lyman digital trigger pull scale to check my trigger and it came in at 7 ounces. That is way too light for me. While dryfiring I would set off the trigger just trying to touch it. I brought the weight up to 1.25 pounds which is ideal for me. 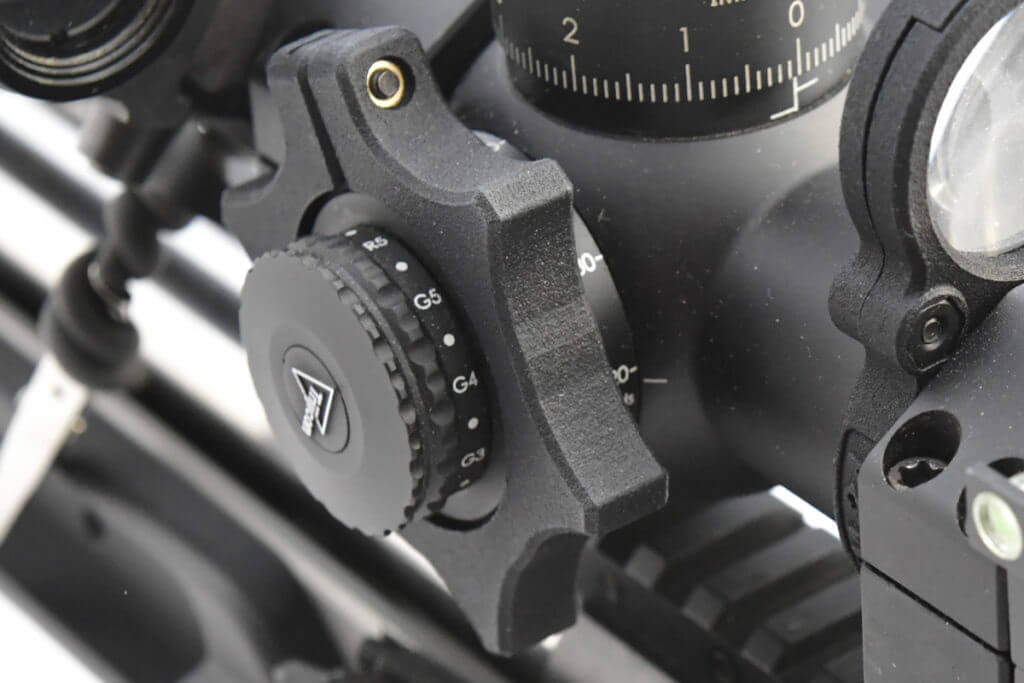 The 457 comes with an 11mm dovetail on the action. I went with Warne Scopemounts for a picatinny rail that clamps onto the dovetail. The rail has a 15 MOA cant which allows you to shoot at longer ranges before running out of scope elevation travel. The rail is made from 7075/T6 aluminum and hard anodized and it self-centers on the action. 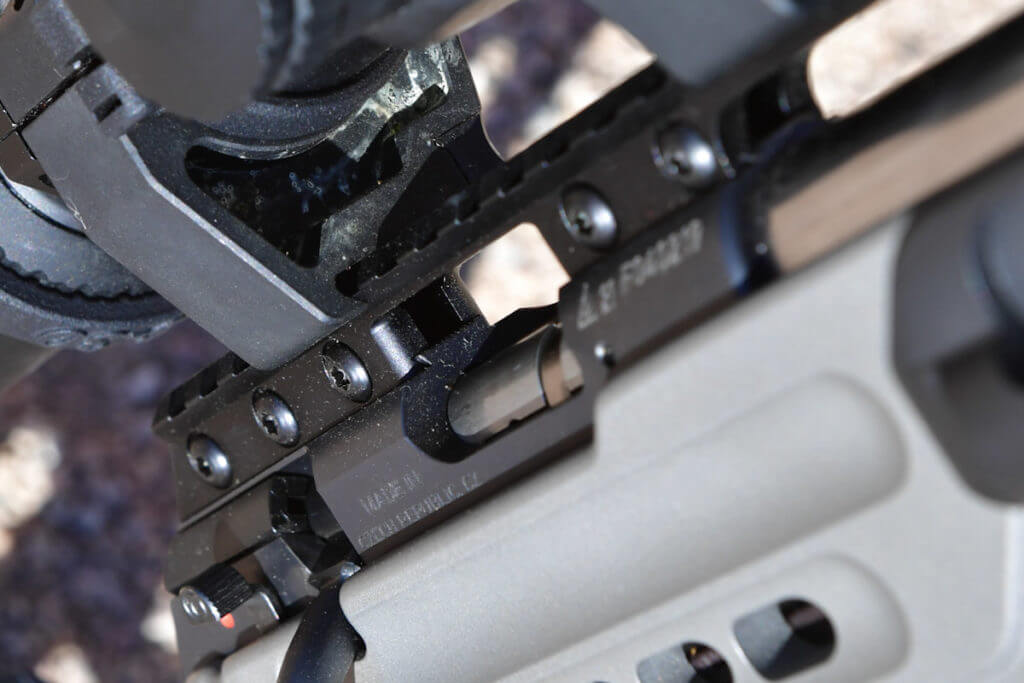 On top of the rail, I mounted an older Trijicon AccuPower 4.5-30 (now called the Tenmile) that I pulled off of another rifle. I lucked out and bought one at a deep discount when they were discontinued and the Tenmiles came out. It is a first focal plane optic with Trijicon’s MRAD version of a tree reticle. The reticle allows you to make fast follow-up shots if you miss and makes using holdovers instead of dialing super easy. It has both red and green illumination of the reticle, 0.1 MRAD adjustments on the dials – and most importantly, it can be focused down to 25 yards which is critical for PRS and NRL competitions. 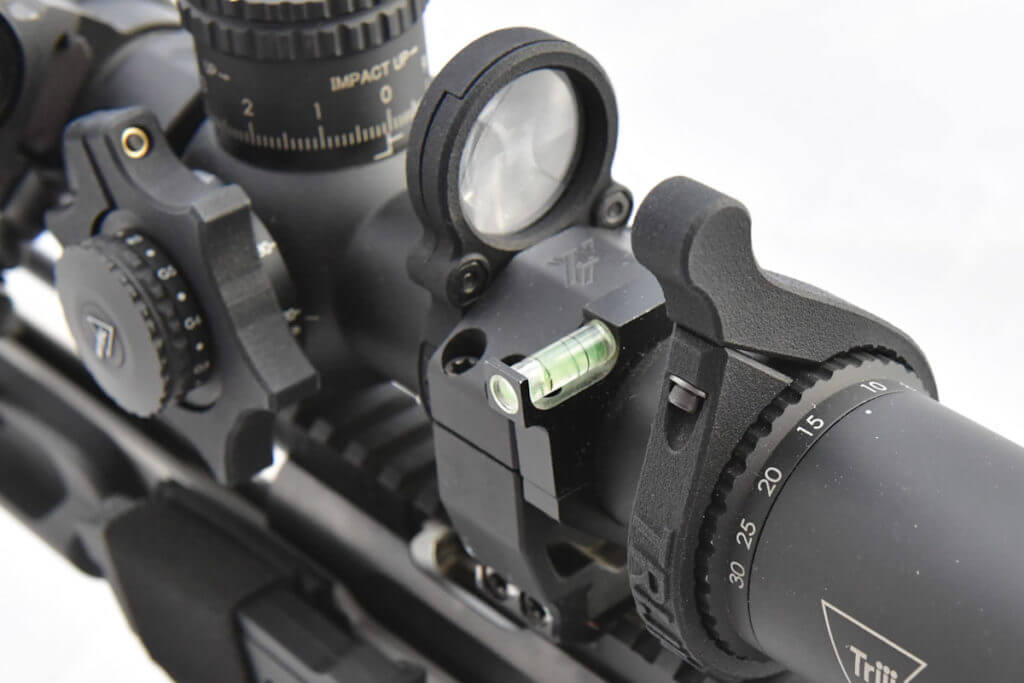 I added a few doodads from MK Machining to the scope as well. A throw lever to make fast adjustments to the power of the scope. MK’s parallax adjustment wheel, which makes it much easier to adjust the side focus when on the clock and shooting targets at different ranges. Last was the turret magnifier. I am now almost out of my 40s and the small lines on the turrets can be hard to see. The magnifier mounts to the tube and makes the lines easy to read, even with older eyes. If you are young with good eyes, you might make fun of this part; I would have 20 years ago, but now it’s very nice to have. 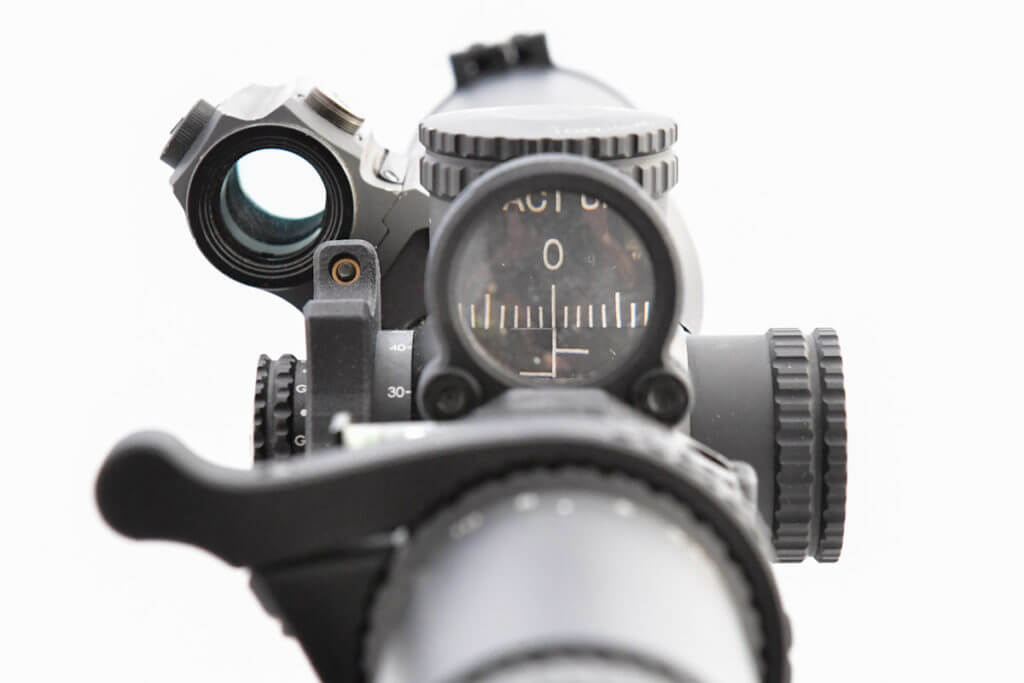 With everything assembled in the MPA chassis, the rifle was butt heavy. I wanted the rifle to balance at the point just in front of the magwell so that it is stable on barricades and other props. MPA makes weights to change the balance point of your rifle. I used the two front internal weights which added 1.6 pounds. The balance was still a little butt heavy so I also added MPA’s new Competition Side Rails. These rails attach to the forend of the rifle. The rails add a bit of weight but more importantly, they add about 75% more width to your forend. The wider platform gives you added stability when shooting with a front bag on a prop while still allowing you to attach almost all arca accessories to the forend. More weight can be added to the side rails if needed but my rifle was now balanced without them. 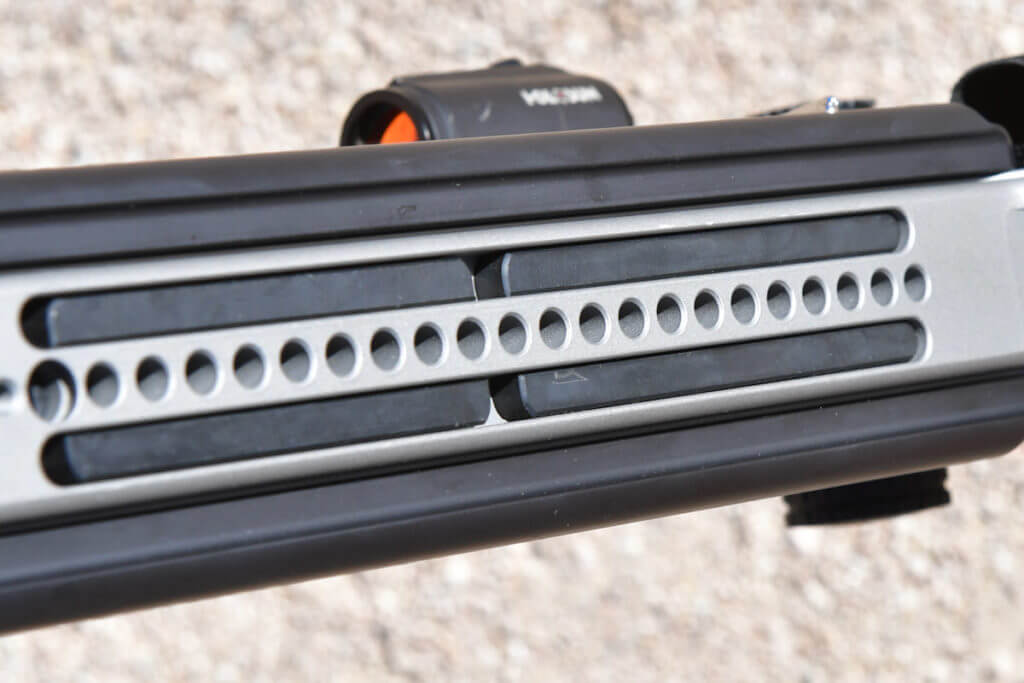 The 457 needed a few other finishing touches to be complete. A new bolt knob from Anarchy Outdoors, an extended mag release, and a magwell block from DIP Products. A Game Changer compensator from Tandem Kross. The comp comes with TK’s special coating which makes getting the lead out far easier; it also makes the gun move a bit less under recoil. MK Machining basepads were added to a couple of my mags as well. The basepads increase the factory 10-round mags to 13 rounds. The added length also makes them easier to seat in the MPA chassis. Last, I added a Skyline bipod from Warne Scopemounts with a variety of feet for different surfaces. 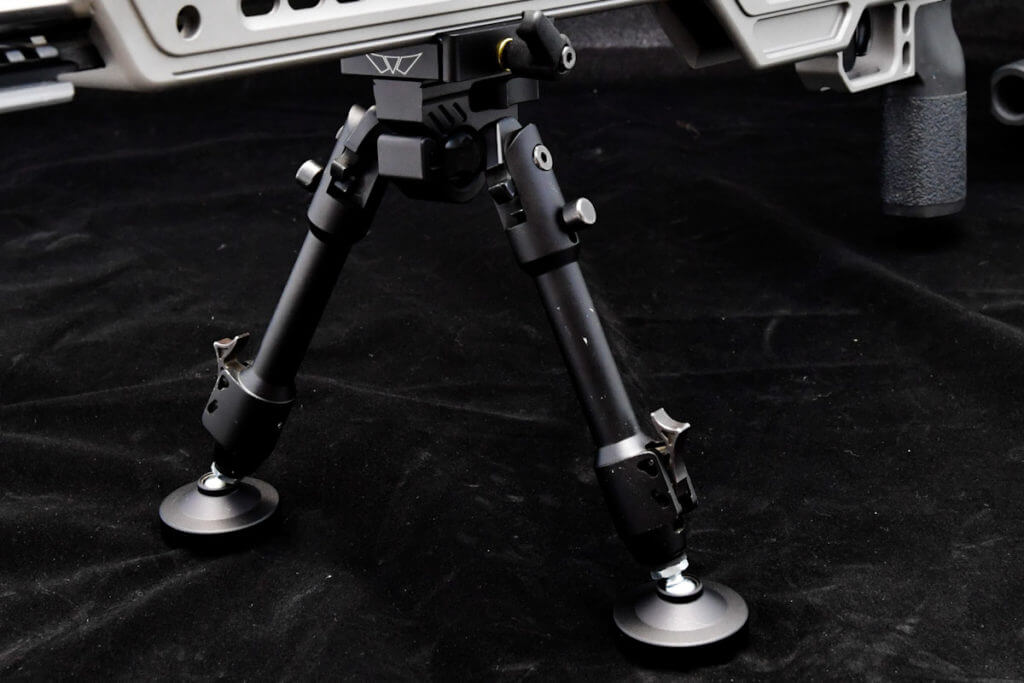 After breaking in the barrel I did some initial testing with a variety of ammo. Lapua Center-X was predictably the best, producing ragged holes at 35 yards. Why 35 yards? That is where I zeroed Projekt 457. Most people will say to zero a precision 22 at 50 yards, but I am not a fan of that for my rifle. At 50 yards I end up having hold unders. That is where you have to hold under the target because of the bullet’s flight path. I go with 35 yards as I then have only holdovers and no hold unders. Don’t take mine or anyone else’s word as gospel for what distance to zero your precision 22. Put your data into a ballistic solver and change the zero distance until you get the trajectory that you prefer. 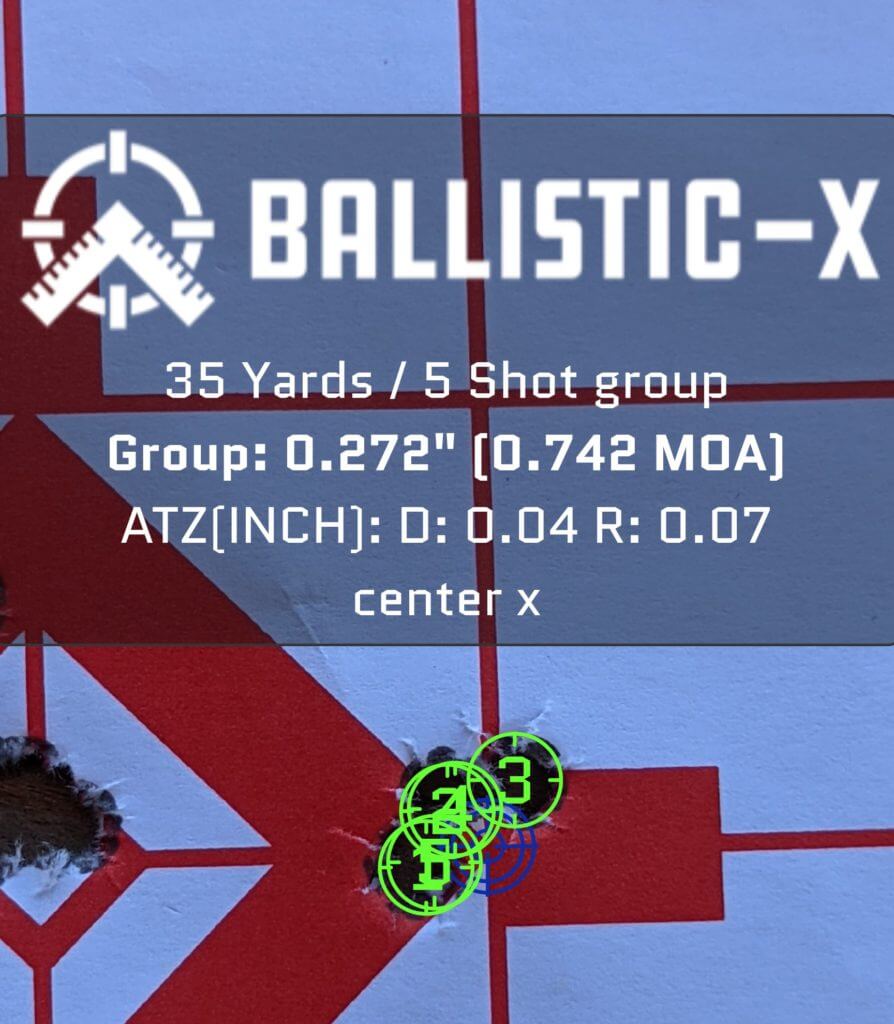 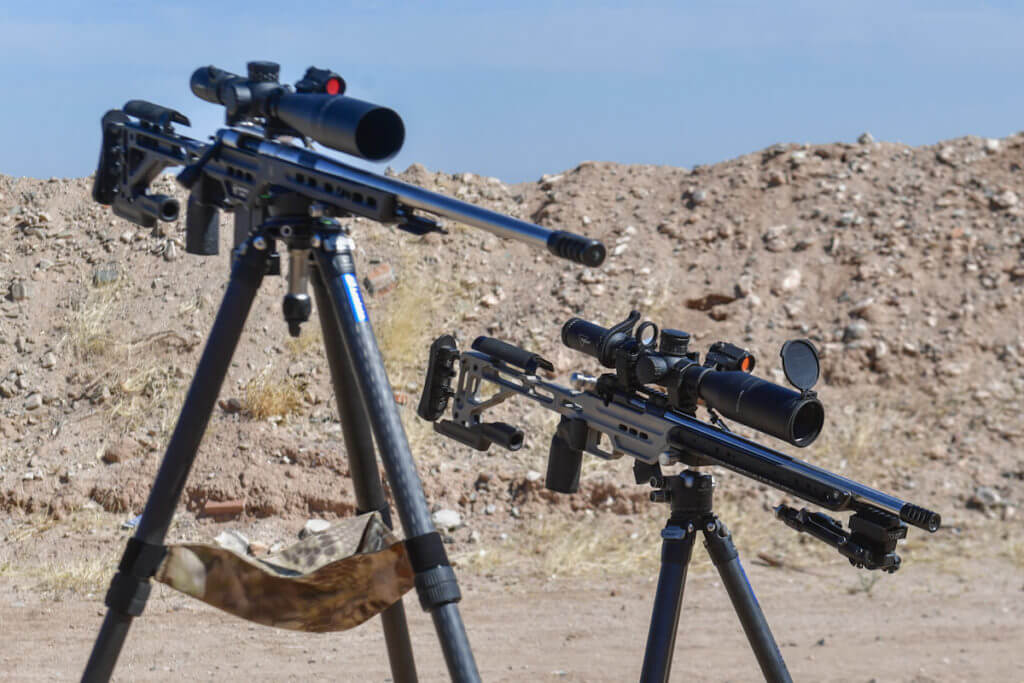 To wring out all the accuracy possible with Projekt 457 I needed to use lot matched ammo. Lapua offers shooters a chance to test their rifles with various lots of ammo with all human and environmental factors taken out at their Rimfire Performance Centers. The centers are located in Germany, Finland, Norway, and in the US in both Ohio and Arizona. 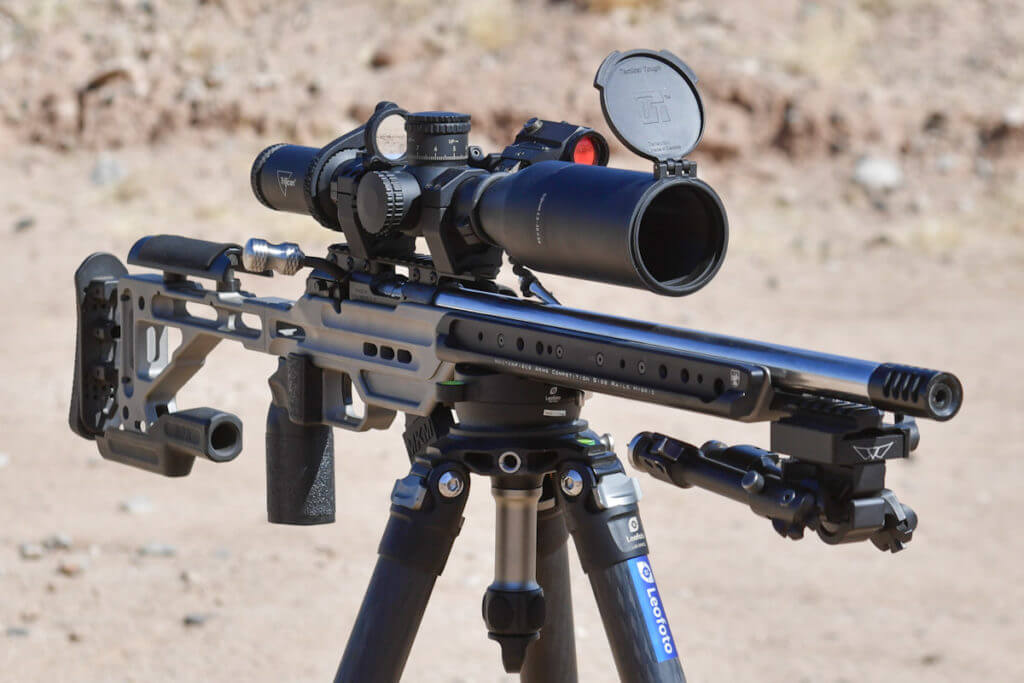