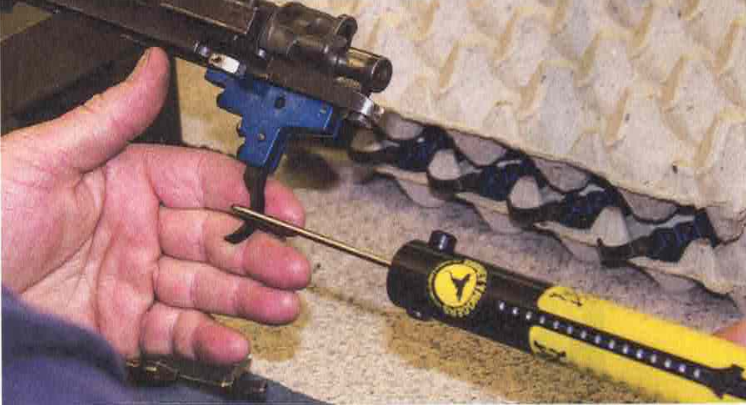 To make a rifle fire we must pull a trigger, and pulling a trigger might be the ultimate expression of hand-eye coordination. Triggers move when you pull them, and that movement needs to be understood in order to know a good trigger from a bad one. A careful consideration of each stage and aspect of trigger movement will help you make an evaluation.

Take-up describes the initial movement of a trigger before resistance is met. There are two types of triggers, single and two-stage, and both can have take-up. Take-up on a single-stage trigger is undesirable: if it exists, it’s generally very light and over an infinitesimal distance. With a two-stage trigger you’ll feel some resistance, which can be as much as half the pull weight, during take-up.

Pull weight is the amount of pressure that must be applied to a trigger to release the sear. A good place to start is with a pull weight that’s no more than half the weight of the rifle. Most sporter-weight rifles equipped with a riflescope weigh between 7 and 8 pounds, which puts our target pull weight at 3 ½ to 4 pounds. This may sound heavy, but if the trigger performs well across its other aspects, it can be ideal. A quality trigger will allow you to adjust its pull weight to suit your performance.

Creep describes the movement of a trigger after take-up, but prior to sear release. It is common in factory triggers, and it is why many hunters opt for an aftermarket trigger or take their rifle to a gunsmith.

Dealing with creep is where the “surprise break” idea of shooting comes from. Your fingers are not sensitive enough to differentiate the exact trigger pressure or movement needed to fire the rifle. The wisdom has been to just keep applying pressure, and if you do everything else right, the rifle will fire while your sights are on target. This method relies too much on luck and has no place in hunting. Good triggers are creep-free, so you do not have to hold your sights steady through a creepy pull as you wait for the rifle to go bang.

This is probably the most misunderstood aspect of a trigger. Over-travel is the movement of the trigger after sear has been released. Few triggers have no over-travel, but a good trigger has very little.

Why is minimal over-travel important? The movement of our finger on the trigger after the sear has been released can move the rifle before the bullet exits the barrel, which will affect point of impact. Over-travel can cause rifle movement, and a heavy pull weight exaggerates it.

When you pull a trigger, it should feel the same way every time. This is how you come to know when your rifle will fire and are not surprised when it does. Consistency is why aftermarket trigger companies like Timney are in business. It’s also why more manufacturers are equipping their rifles with better triggers; shooters demand them.

Aside from practice, the most important thing you can do to help you shoot better is to make sure your rifle has a good trigger. Whether you buy a drop-in trigger like those offered by Timney or take your rifle to a gunsmith, generally it’s less than a $200 fix. A good trigger will help you place your shots correctly.